When you have two state roads running through a small town, traveling can be hazardous for pedestrians and bicyclists. Town officials of Hinsdale (with Routes 119 and 63 traversing its Main Street) have long wanted to address this dangerous problem.

Town selectman recently passed a “Complete Streets” policy, which will now consider all of Hinsdale’s 4,046 residents — and not just motorized vehicles — when improving its roadways. The Southwest Region Planning Commission (SWRPC) assisted the town in developing the policy as part of their work with the Partnerships to Improve Community Health (PICH) initiative, a collaboration of Healthy Monadnock partners funded by the Centers for Disease Control and Prevention.

This summer, Hinsdale participated in a Complete Streets demonstration project — a temporary installation of traffic-slowing methods — that inspired town officials and residents to move forward with the policy, said Kathryn Lynch, the town of Hinsdale’s community development coordinator.

“Drivers are not friendly toward, or stop for, pedestrians on Main Street … every day there are close calls,” noted Lynch. The town’s Main Street has four crosswalks; the street also serves as a thoroughfare for the two state highways.

“When we did the Complete Streets demonstration project this summer, we noticed that traffic really slowed down for pedestrians,” said Lynch.

The demonstration project included a bike lane, curb bump-outs, and “parklets,” which are small parks that occupy a parking space with landscaping and benches for people to sit and relax. The parklets were placed across the street from each other, forming a ‘pinch point’ to slow traffic as it entered Main Street. 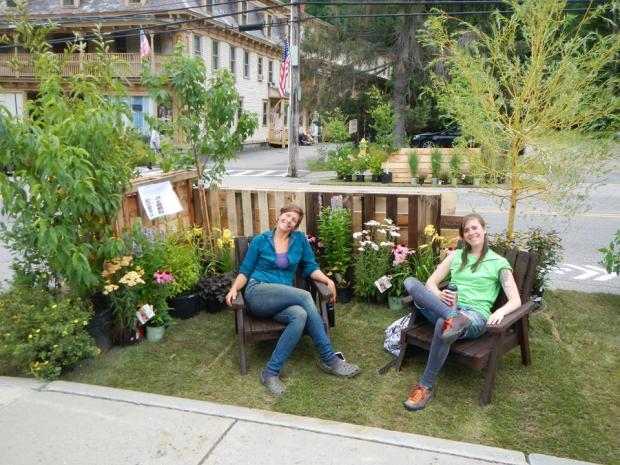 “It really brightened up Main Street,” said Lynch. “And it worked. Traffic slowed down.”

The Hinsdale board of selectman adopted the Complete Streets policy in August. The policy requires that any construction of a new road or alteration of an existing road would take all users of the roadway, including pedestrians and bicyclists, into consideration. The policy also looks to create traffic-calming elements on its Main Street; costs would be paid for by grant money.

“We are hoping to do some parklets, or bump-outs that are seasonal,” said Lynch, who has recently applied for a grant to pay for the improvements. The bump-outs would be temporary decking material with planters and benches that could be stored during the winter months when the area needs to be cleared for snow plowing.

The town is also looking to increase the visibility of crosswalks on Main Street to alert motor-vehicle traffic to pedestrians. Lynch also hopes to convince the state’s Department of Transportation to reduce Main Street’s speed limit, currently at 30 miles per hour.

“Right now, drivers just don’t stop for us,” she said.

Other roadways in town also need improvement, noted Lynch, namely School Street where the town’s elementary middle/high schools are located. Among the problems are gaps in the sidewalk network, sidewalks that are in poor condition, and a dangerous blind curve used by schoolchildren to cross Route 119 to school. Other discussions among townspeople and selectmen have included utilizing the rail trails for pedestrian and bicycle traffic for those getting to work or school in town. Lynch is meeting with the state DOT and officials at the National Parks Assistance Program to help promote these ideas.

Complete Streets, coupled with Safe Routes to School programs in its schools, and its new 23 bike racks through the Rack it Up! program, are all steps in the right direction to make Hinsdale a more bike and pedestrian-friendly town, said Lynch.

“Complete Streets will give Hinsdale a stepping stone to make its roads safer,” said Lynch.